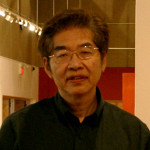 Charles Liu is widely recognized as one of the most important Chinese artists living outside of Asia today. He is an artist, curator, author, and critic. He was born in Shanghai, China and raised in Taiwan. After graduating from the National Taiwan College of the Arts, he went to Escuela Superior de Bellas Artes de San Fernando in Madrid, Spain and stayed in Spain for 7 years. He later moved to the United States and taught at North Central College in Naperville, Illinois.

Mr. Liu has been invited by international art exhibitions numerous times, published more than 400 articles on art, and conducted more than a dozen solo exhibitions in Spain, the United States, China and Taiwan, in such prestigious locations as the Herbert F. Johnson Museum in New York State, the Marjorie Barrick Museum in Las Vegas, the Washington Pavilion of Arts and Science in Sioux Falls, the National Taiwan Museum of Fine Art in Taiwan, the National Dr. Sun Yat-sen Memorial Hall in Taipei, the Art Biennial in Shanghai, and the National Art Museum of China in Beijing.

Mr. Liu frequently guest curates exhibitions in both the United States and in Asia. In addition, he edited “Artists of Chinese Origin in North America Directory” I and II, “Artists of Taiwan“. He has published the award-winning “The Chinese Overseas Art Icons of the 100 Years (20th Century)” and ” Yi-Lin-Wai-Shi: Art is so charming ” etc. Currently, he is the art columnist, known as Liu Quixote (劉吉訶德),  for “World Journal Weekly,” the largest Chinese daily newspaper in North America, ”Artist” magazine in Taiwan, and “Collections” magazine in China. He has given many lectures including at the China Institute in New York, the Asia Society in New York,  and the Johnson Museum at Cornell University (2008).